if you need any help

Why Invest in Thailand

Thailand’s strategic location in the heart of ASEAN connected with the fast-growing CLMV (Cambodia, Laos, Myanmar and Vietnam) countries makes it an ideal location for businesses and business investors. Additionally, the powerhouse economies of nearby China and India are also easily reachable from Thailand by virtue of its world-class transport infrastructure, which further provides great opportunities for cross-border trade and investment. 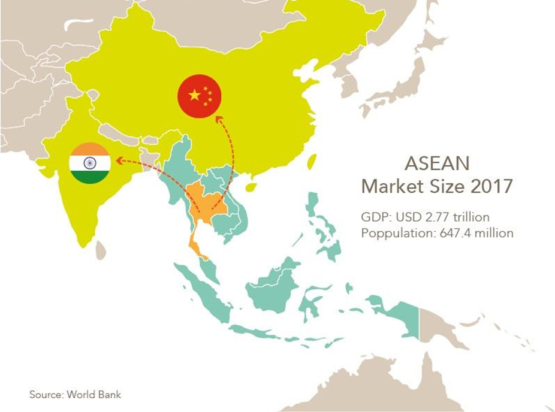 Stable Economy and Strong Export Base

Thailand’s GDP has increased continuously over the past several years. The Office of the National Economic and Social Development Council reported Thailand’s GDP growth for 2018 to be 4.1%, and has additionally forecasted that GDP growth for 2019 will be in the range of 3.5 – 4.5%. It is expected that the Thai economy will continue to grow favorably, driven primarily by increased consumer spending and expanding private investment, as well as gains from the recovering tourism sector. In 2018, private consumption grew at the highest rate in 6 years, accelerating to a rate of 4.6 percent, from the 2017 rate of 3.0 percent. Business investment, especially in machinery and equipment, has expanded even more rapidly, particularly as it applies to investments designated for the expansion of production capacity for exports. In 2018, applications for BOI’s investment promotion were valued at a total of 683.9 billion baht for proposed investments in the Eastern Economic Corridor (EEC) area, which was an increase of 137.4 percent from 2017. This trend is expected to continue, especially as companies begin to relocate in response to escalating US-China trade tensions.

Featuring an open economy with liberal economic policies, Thailand is a participant in a large number of bilateral Free Trade Agreements (FTAs), as well as the ASEAN Free Trade Agreement (AFTA). This allows businesses in Thailand to engage in virtually tariff-free trade with 17 different nations, including such major global economies as Australia, China, Japan, New Zealand, South Korea, and India in addition to the other 9 ASEAN members.

As a magnet for foreign investment, FDI stock in Thailand has soared from USD 95 billion in 2008 to USD 219 billion in 2017; a compounded annual growth rate (CAGR) of 9.72% over the decade. Having grown at an increasing rate for the last 5 consecutive years, and with this growth expected to continue throughout 2019, Thailand’s economy has the momentum to become an even stronger base for trade and investment in the immediate future.

To further facilitate the business process for both foreign and local companies, the Thai government has been pursuing numerous initiatives aimed at assisting investors and streamlining procedures by eliminating and/or streamlining unnecessary laws and regulations that are or act as obstacles to business operations. This, along with other endeavors, has significantly improved Thailand’s international ranking for ease of doing business, and reduced the amount of time needed to start a new business from 27.5 days to 4.5 days.

To ensure Thailand’s economy continues to develop over the next 20 years, the Thai government has adopted a new economic model called Thailand 4.0, which is focused on transforming Thailand into a value-based economy built upon science, technology, innovation and creativity. To this end, five existing high potential industries and an additional five new targeted industries have been identified as the “New Engines of Growth” driving the country into the future.

To further boost the country’s competitiveness, the Thai government has generated a long-term infrastructure plan to accelerate economic growth. This plan prioritizes the improvement of existing infrastructure as well as the construction of numerous new projects in many areas including expansion of airports, seaports, roads, rail systems and ICT infrastructure.

To provide additional maritime transport infrastructure and facilities, a USD 3 billion project will expand port capacity in the Eastern Seaboard area, including a cruise ship port in Sattahip and upgrades of the major shipping ports of Laem Chabang and Map Ta Phut. Once completed, Laem Chabang should be able to handle 18 million TEU a year while Map Ta Phut should be able to handle 19 million additional tons of cargo of petrochemicals and natural gas.

By extending the top-quality roads and highway network of Thailand, which presently connects provinces across the whole country, into all bordering countries, increased trade and investment among mainland ASEAN member countries will be facilitated. This network is also planned to be extended onward to China and India in the future. Projects underway are also expanding the highways to four or more traffic lanes nationally.

Bangkok is presently served by the BTS (Sky-train), MRT (Underground and Purple Line) light railway systems, and the Airport Rail Link. The Bangkok Metropolitan Administration (BMA) is working on the expansion of the city’s light rail network under its M-MAP plan, with an anticipated expansion of 400 kilometers of new tracks to be added to the already existing 100 kilometers.

Thailand has also undertaken numerous projects to strengthen the country’s ICT infrastructure, guided by the National Digital Economy Master Plan (2016-2020). The government has worked on providing free Wi-Fi hot spots in almost 25,000 villages across the country, creating a national broadband network and connecting to almost 75,000 villages, as well as all schools and local hospitals. Concurrently they have been doubling the capacity of the submarine cables serving the country, including adding a new cable connecting Thailand to Hong Kong. These projects, among other initiatives, have resulted in an increase in the local ICT market size and improved the country’s international digital rankings. For example, Thailand has moved up 4 places in the United Nations EGDI rankings from 2016 to 2018, 4 places in the ITU IDI rankings from 2016 to 2017, and similarly 4 places in the International Institute for Management Development (IMD) World Digital Competitiveness Rankings from 2017 to 2018.

Another key factor enhancing Thailand’s competitiveness is the strength of its scientific and technological prowess. The National Science and Technology Development Agency (NSTDA) is the agency responsible for strengthening the development of science and technology in the country. They have established the Thailand Science Park (TSP), providing 2,000 highly-skilled personnel to support participating companies located in TSP areas. The expansion of TSP into Phase II is in the pipeline. With this enlargement, the park will become the largest fully-integrated research and development hub in Thailand. In addition, Thailand has established three regional science parks. There are the Northern Science Park in Chiang Mai, the Northeastern Science Park in Khon Kaen and the Southern Science Park in Songkla.

Building on the success of the Eastern Seaboard, the Thai government is presently developing the Eastern Economic Corridor (EEC), an ASEAN-leading economic zone for industrial, infrastructure, and urban development spanning over 13,000 sq. km. across three provinces of Chonburi, Rayong, and Chachoengsao. During the first five years, approximately USD 50 billion of combined public and private investment projects are expected in the EEC. To further support innovation-led business within the EEC, the investment environment features generous tax and non-tax incentives as well as eased regulatory restrictions. The designated zones for targeted industries are EECi, EECd and EECa

Board of Investment (BOI)

The Board of Investment stipulates the following criteria for project approval:

1. Development of competitiveness in the agricultural, industrial and services sectors

1.2 Modern production processes must be used.

1.3 New machinery must be used.
In case of imported used machinery, criteria are as follows:

1.3.1 In case of used machinery not over 5 years old, counting from the manufacturing year to the importing year, the machinery shall be allowed to be used in the project and counted as investment capital for the calculation of the cap on corporate income tax exemptions; however, they shall not be granted import duty exemption. A machinery performance certificate issued by a trusted institute identifying efficiency, environmental impact and energy usage for the machine, as well as its fair value, must be obtained.

1.3.2 In case of used machinery over 5 years old but not exceeding 10 years old, counting from the manufacturing year to the importing year, only press machines shall be allowed to be used in the project and counted as investment capital for the calculation of the cap on corporate income tax exemptions; however, they shall not be granted import duty exemption. A machinery performance certificate issued by a trusted institute identifying efficiency, environmental impact and energy usage for the machine, as well as its fair value, must be obtained.

1.3.3 For sea and air transport activities and molds and dies, used machinery over 10 years old, counting from the manufacturing year to the importing year, may be allowed to be used in the project as deemed appropriate, counted as investment capital for the calculation of the cap on corporate income tax exemptions and granted machinery import duty exemption.Criteria shall be as specified by the Office of the Board of Investment.

2.2 Projects or activities with type and size that are required to submit environmental impact assessment reports must comply with the related environmental laws and regulations or Cabinet resolutions

2.3 Projects located in Rayong must comply with the Office of the Board of Investment Announcement No. Por 1/2554 dated May 2, 2011 on Industrial Promotion Policy in Rayong Area.

3.1 The minimum capital investment requirement of each project is 1 million baht (excluding cost of land and working capital) unless specified otherwise on the list of activities eligible for investment promotion that is attached to this announcement.

3.1.1 As for knowledge-based services, the minimum capital investment requirement is based on the minimum annual salaries expense specified in the list of activities eligible for investment promotion that is attached to this announcement.

3.2 For newly established projects, the debt-to-equity ratio must not exceed 3 to 1. Expansion projects shall be considered on a case-by-case basis.

3.3 For projects with investment value of over 750 million baht, (excluding cost of land and working capital), the feasibility study for projects applying for investment promotion must be submitted with details as specified by the Board.

Source: Announcement of the Board of Investment No. 2 /2557